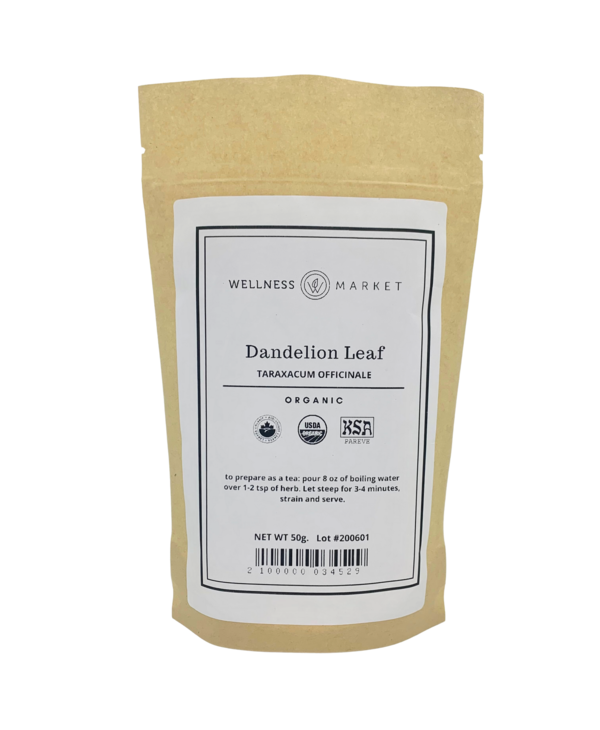 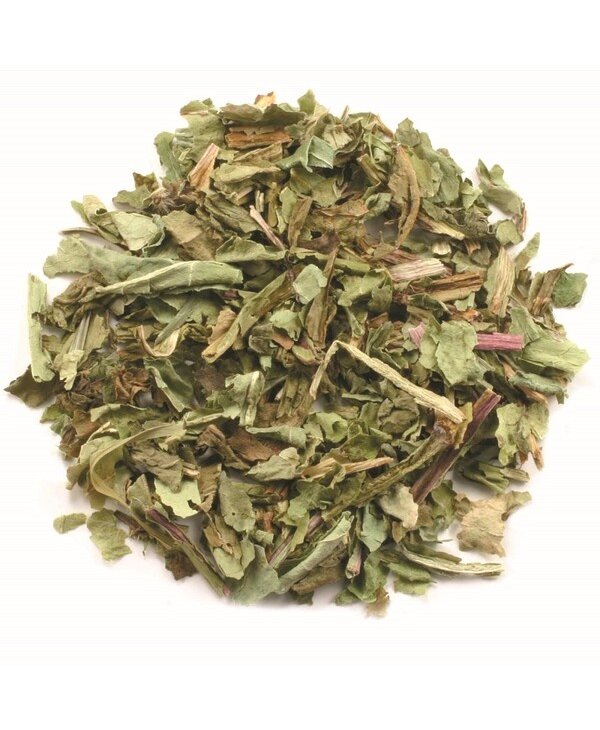 Dandelion was traditionally used in many systems of medicine to support digestive and gastrointestinal health. Dandelion leaf if a powerful diuretic..

Taraxacum officinale has a long history of use worldwide as an edible food and restorative tonic. Dandelion leaves can be eaten fresh in spring, and the long taproot is dug for its beneficial properties in the fall. Our organic dandelion leaf makes an excellent addition to herbal tea blends. Leaves can also be brewed as dandelion leaf tea, tinctured as dandelion extract, or added to soups.

Dandelion was traditionally used in many systems of medicine to support digestive and gastrointestinal health.

Dandelion bears a sun-yellow flower head (which is actually composed of hundreds of tiny flowers) typical of the Asteraceae family, that closes in the evening or during cloudy weather and opens back up in the morning, much like its cousin calendula. When the flower is closed, to some, it looks like a pig's nose, hence one of its names, 'swine's snout.' It is a perennial herb with deeply cut leaves that form a basal rosette, somewhat similar to another family member, the wild lettuce, and has a thick tap root which is dark brown on the outside and white on the inside. It is native to most of Europe, Asia, and northern Africa, naturalized all over the world, and commonly found growing alongside roads and in lawns as a common weed.

Dandelion is produced commercially in Bulgaria, Hungary, Poland, Romania, the former Yugoslavia, and the United Kingdom. However, dandelion grows practically everywhere, and is wild collected in a variety of climates, even in the Himalayas up to about 12,000 feet, where it is often gathered for use in Ayurvedic medicine (the traditional healing system of India). Dandelion will grow anywhere, but will produce more substantial roots in moist, rich, deep soil. Pharmacopeial grade dandelion leaf is composed of the dried leaves collected before flowering and the root collected in autumn or whenever its inulin content is the highest.

The use of dandelion was first recorded in writing in the Tang Materia Medica (659 B.C.E.), and then later noted by Arab physicians in the 10th century.

In the United States, various indigenous cultures considered dandelion to be a prized edible, a gastrointestinal aid, a cleansing alterative, and a helpful poultice or compress. The Bella Coola from Canada made a decoction of the roots to assuage gastrointestinal challenges; the Algonquian ate the leaves for their alterative properties and also used them externally as a poultice. Additionally, the Aleut steamed leaves and applied them topically to sore throats. The Cherokee believed the root to be an alterative as well and made a tea of the plant (leaves and flowers) for calming purposes. It is interesting to note that dandelion was used by the Iroquois as well. They made a tea of the whole plant, and also considered it be an alterative tonic. In the southwestern U.S., in Spanish speaking communities practicing herbalism, dandelion is called 'chicoria' or 'diente de leon.'

In Traditional Chinese Medicine (TCM) it is referred to as 'Xin Xiu Ben Cao' or 'Pu Gong Ying' and considered to be energetically sweet, drying, and cooling. According to TCM, dandelion clears heat from the liver and has a beneficial effect on the stomach and lungs, and it can uplift the mood and support lactation.

The root was listed as official in the United States National Formulary, in the pharmacopeias of Austria and the Czech Republic, in the Ayurvedic Pharmacopoeia, and the British Herbal Pharmacopoeia amongst others. Herbalist Rosemary Gladstar strongly promotes this herb, saying that it is "invaluable to women going through menopause." Dandelion root's benefit to the digestive tract is twofold as it contains inulin and is also a bitter digestive tonic which tones the digestive system and stimulates the appetite. It calms heat and also hot emotions and is thus helpful in those that are irritated.

The young dandelion greens (rather than the older ones which become too bitter) are wonderful in salads. These leaves can also be steamed like spinach (although they take a little longer to cook than spinach) and spiced with salt, pepper, and butter. Other savory spices such as nutmeg, garlic, onion or lemon peel can be added as well.

Precautions
No known precautions. We recommend that you consult with a qualified healthcare practitioner before using herbal products, particularly if you are pregnant, nursing, or on any medications.