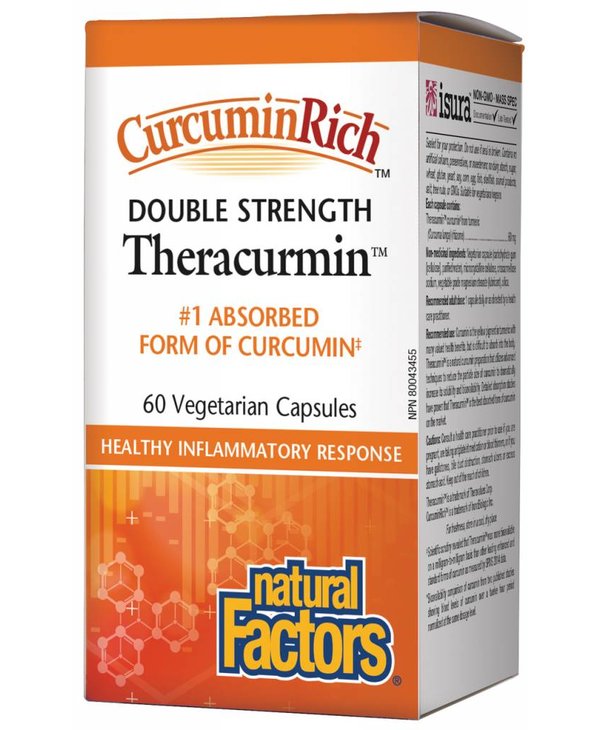 CurcuminRich Theracurmin unlocks the medicinal power of curcumin, the yellow pigment found in turmeric (Curcuma longa). Turmeric is a member of the ginger family, and is the principal spice used in curry. In India turmeric root has been used for thousands of years in traditional Ayurvedic medicine to treat inflammatory conditions.

When it comes to curcumin, it’s not how much you take, but how much you absorb, that matters. Early clinical studies found that large quantities of curcumin had to be consumed because the absorption (bioavailability) of regular curcumin is quite poor. Curcumin is relatively insoluble in water and is rapidly transformed and excreted from the body.

Theracurmin is an advanced formulation that uses proprietary dispersion technology to create microscopic particles dispersed in a colloidal suspension for better absorption. Theracurmin is 300 times more bioavailable than regular curcumin powder, ensuring a therapeutically effective level in the blood. Published studies comparing blood levels of curcumin using leading brands confirm that on a milligram-to-milligram basis, Theracurmin is the best-absorbed curcumin product on the market.

Scientific scrutiny revealed that Theracurmin was more bioavailable on a milligram-to-milligram basis than other leading* enhanced and regular forms of curcumin.
*As measured by SPINS 2014 data.

Curcumin is the yellow pigment in turmeric with many valued health benefits, but it is difficult for the body to absorb. Theracurmin is a natural curcumin preparation that utilizes advanced techniques to reduce curcumin’s particle size, dramatically increasing its solubility and bioavailability. Detailed absorption studies have proven that Theracurmin is the bestabsorbed form of curcumin on the market
Add your review
By using our website, you agree to the use of cookies. These cookies help us understand how customers arrive at and use our site and help us make improvements. Hide this message More on cookies »